Artist Point and Picture Lake are located along the Mount Baker Highway.

Picture Lake and Mount Shuksan is one of the most photographed scenes in Washington.

Artist Point is at the upper end of the highway, snowbound most of the year.

This first set of images was taken on Monday, July14, at the Baker Lake Boat Launch. Mount Baker looms nearby and Mt Shuksan is off to the north, across the lake.

The Boat Launch has one very big, bright light, high up on a poll, illuminating the area at night. This is the source of the light on the trees.

About 11:30 pm the Northern Lights were visible and I was able to get a few pics.

For the most part I used the following settings: Shutter speed: 30 sec; f/2.8 and 1600-2000 ISO. I used a very long exposure on one of these shots and you can see the stars stretched a bit.

The next night I ventured up the Mt Baker Highway, heading to Picture Lake, but the comet was rising in the Northwest…the road is gated a bit past the Heather Meadows Ranger Station, again, view blocked…so we wound up along the road! Got a few decent pics… 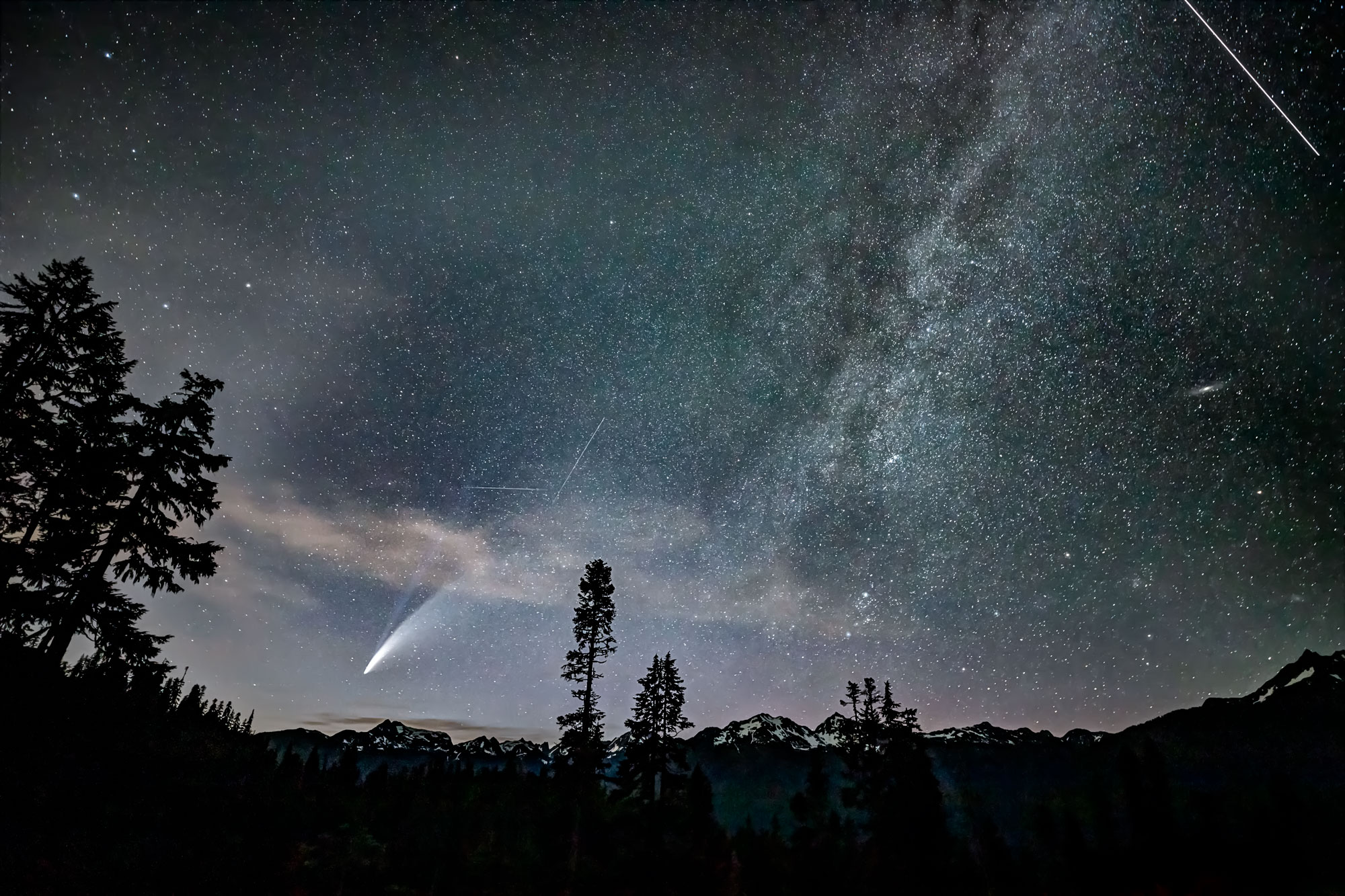 I visited Winchester Mountain Lookout this last August, on the New Moon, hoping for some nice night sky images.

I was with two clients who had signed up for a Hike-In Night Sky Photo Tour.

We arrived early at the trail head so as to get to the Lookout early and so “reserve”it for the night.

The hike in is beautiful, less that 2 miles. We arrived and just lazed about until the sky got dark.

My first comp was this shot of the lookout with the Milky Way above…how awesome!

I got this image and mostly thought I was done, but figured, what the heck, I am out here anyway, might as well shoot some more. I went to the other side of the lookout to shoot, now facing north…and was shocked to see the green glow of the aurora borealis along the horizon!

I decided to do a time lapse image, I used a 20 minute exposure at 100 ISO and here is the result.

And here is one more shot, of Mount Larrabee. 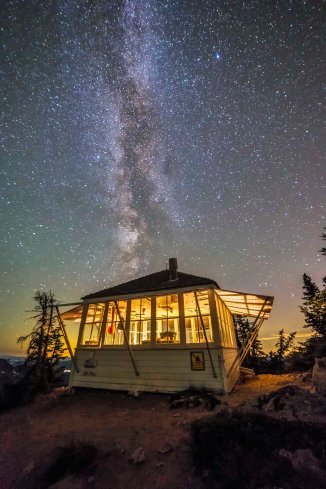 The usual thinking of night sky and Milky Way images is that you must travel a good distance away from the lights of towns and cities to get any decent shots.

I don’t live near  big city, Seattle is 65 miles away, but there are several towns grouped together where I live. But I decided to head up to a local promontory called Big Rock to see about a few night sky images last weekend during the last New Moon.

These three images show that although the lights DO wash out the details of the stars there is still a chance to get some interesting images.

Mount Baker is visible as a small bump on the horizon. The green glow is the aurora borealis, adding some alien color to the edge of the sky. 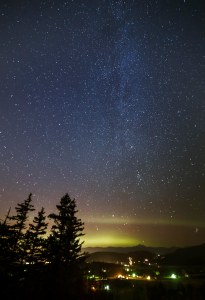 The next New Moon is October 12th. If you’d like to register for the next Night Sky Photo Tour, here is the link.

The New Moon is marked every month on my calendar. As it gets closer I start watching the weather service map, looking for where there will be clear skies. Last month was a complete dud, the 5-night window only saw overcast and rain.

But this weekend the sky was clear. I had three people sign up for my Night Sky Photo Tour on Saturday night.

Officially the New Moon is tonight, June 16th, but if you are close, one or two days plus or minus, you will get the lighting you want.

Camped under the Milky Way

This first shot I have been dreaming of for some time. My son is 10 years old and he likes to go camping with his friends, swimming and being goof balls. Of course they always bring their electronic devices. I made sure to tell them to save some battery life for dark.

The strip of the Milky Way appeared directly over the tent. The exposure to capture the stars is 30 seconds long, but that’s way too long for the light from the I-pad. So I had them sit and turn it on for a second or two and then quickly off.

Then I spent some time circumnavigating the tent. I got a shooting star in this one.

and then as I faced north I captured this image. The pink glow is actually the Aurora Borealis! How cool is that!

I had three people sign up for my Night Sky Photo Tour on Saturday night.  We visited the Washington Pass Overlook to capture images of Liberty Bell. Between instruction advices I snapped a few images. This image is from a north-facing view. To the naked eye there was NO color.

Needless to say we were all excited to see the Northern Lights there on the horizon!